An Introduction to Lars Nørgård 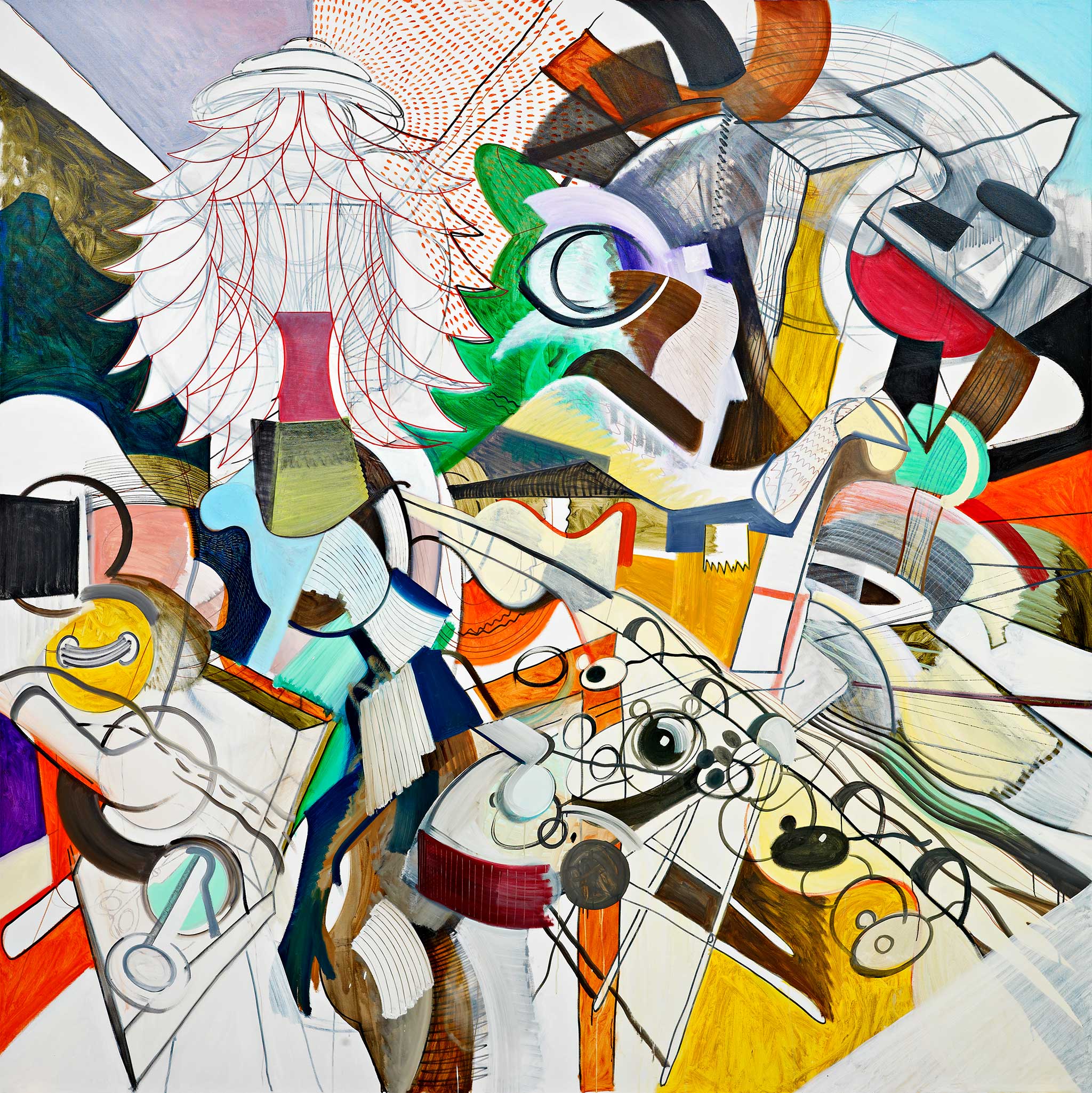 Art history has a tendency to come in bunches. One style has traditionally replaced another, often as a reaction to what has gone before. Trends, movements and new technological advances create new ways forward, some of which turn out to be dead ends that are quickly put in their place in the uncontrolled system known as art history. But when art is arranged according to a historical system, everything that doesn’t fit into the acknowledged categories sticks out through chinks in the art-historical chinks”. Such non-conforming artists are then viewed as either pioneers or originals to an extent that makes them into art-historical loners. Art history is full of these loners: artists who can’t quite be categorised, but who manage to take art in new directions by virtue of their unique character.

Such an artist is Lars Nørgård. Although he made his breakthrough in the 1980s as a member of Værkstedet Værst (The Workshop Worst) and was thus one of the generation nicknamed De Unge Vilde (“Wild Youth”), his manner has never conformed to an accepted generational image. Although the rather dark, quirky portraits of the people with whom Lars Nørgård associated in the 80s came from punk and what is nostalgically called the black age, they are all created with a twinkle in the artist’s eye and on the basis of a way of looking at the surrounding world that can be classified as chuckling rather than bitingly absurd. Even at that time, Lars Nørgård interpreted the meaningless as the absurd. This is a path he has followed ever since in both his painting and his drawings and which, constantly alternating between the figurative and the abstract, allows the absurd to act as its sounding board.

For the first time ever, we are looking back on Lars Nørgård’s work in order to show the entire story in an exhibition. From the above-mentioned portraits of his colleagues and a time that was unrestrained and keen to experiment, through the figure paintings, meticulously painted in strong colours, to the almost abstract colour surfaces in which figuration lies hidden beneath the glaze. We also look at the drawings, which if anything have constituted an important and relevant subtext to the paintings. From the coruscating black pencil drawings, put on the paper in hard prints and with curious, circling movements, to the delicately drawn absurd scenes in the style of Gary Larson, committed to paper in a long, unbroken line. We take an occasional look at the sculptures, which stand like touched up drawings in space, at the many illustrations done in collaboration with the best of the country’s authors, and at the decorations that make the idiosyncratic Nørgård universe three-dimensional. However, these phases in Lars Nørgård’s work do not fall into a strictly linear pattern. Instead, the artist varies between the different media, between the figurative and the abstract, in a constant, searching, centrifugal movement and with a furious rate of productivity that can leave even the most hardened painter short of breath.

Lars Nørgård calls this retrospective exhibition LUXURY VISIONS. The very title marks the chuckling distance that is so much part of his work. A vision can be both a phantasm, a mirage, which is to say ultimately a falsification, and a heavenly, divine encounter that it is impossible quite to forget. In the case of Lars Nørgård, both can apply. A phantasm and a celestial tremor can easily exist side by side. And they can even do so when absurdly combined with luxury. A vision is of course not usually an event associated with luxury. Luxury is related to something profoundly material. So a luxury vision is either a sumptuous divine apparition – or a decadent, well oiled deception. Lars Nørgård’s art pulsates constantly between these two poles: the existential search and the distant set-up. It is this state of both-and that helps to make them so vibrant.

The word “absurdity” comes from the Latin absurditas, meaning incongruity. Absurdity is something other than slapstick humour. Absurdity emerges rather when someone attempts to act meaningfully in a meaningless manner. When life finds its own meaningless meaning, we feel the beating wings of absurdity even though we are in a constant search for a meaningful meaning. For that reason, Lars Nørgård’s meaninglessness is far from nihilistic, but is rather a piece of absurd theatre, staged and orchestrated down to the least detail with a perfect cast of bellboys, snowmen, cacti, fish bones and anything else that has fitted into the quite eccentric logic of the images. In the absurd pictures, too, absurdity threatens to take over the surface. The apparently expressive brush strokes can also be seen as visual surfaces that imitate expressivity and seem to have grown out of the figurative. Tiny traces of figures can be discerned under most paintings. It is as though these figures were cast in plaster and then melted, made pliable and stretched out in amorphous forms that twist and turn in crowded, circular movements. The surfaces and the lines are far too controlled to be seriously expressive. And yet every single image trembles with pent up energy. Perhaps for the very reason that the energy is constantly kept in check by the artist’s unfailing control.

Lars Nørgård is thus both controlled and expressive. His approach to of the canvas, which is splendidly documented in Joachim Rosenstand’s little film, is full of movement. Restless, sudden movements attacking the canvas from many different angles provide immediate and purely physical proof of an expressive process. And yet the whole of the meticulously constructed gallery of figures from Lars Nørgård’s figurative pictures is present somewhere or other beneath every brush stroke. Perhaps because the drawings ultimately contain the key to his work.

Lars Nørgård has always drawn. He draws at all times of the day and night. He keeps his pad on the bedside table and takes it with him everywhere. Everything starts with a drawing. And Lars Nørgård’s drawings are not rough sketches. On the contrary, they are precise and meticulous portrayals of absurd situations which on the one hand we recognise, but which we have never seen before. Entertaining indeed, but at the same time heartrendingly serious in their silent isolation. As in the case of the surrealists, the drawing emerges as a spontaneous image when the pen is put to paper. And the image that emerges seems to have arisen as the most natural product of the mind’s countless nooks and crannies.

Is Lars Nørgård an overwintered surrealist? Not exclusively. His colours could have come from pop art and his imagery from American expressionism. But most of all, the expression is completely Lars Nørgård’s own. KUNSTEN possesses a considerable collection of Lars Nørgård’s works. We believe that in all its singularity his work constitutes an essential contribution to the history of Danish art. So the exhibition LUXURY VISIONS starts out from Lars Nørgård’s latest paintings, in which a fusion between the figurative and the abstract forms of expression has taken place. From this, we look back on an oeuvre that is quite unique. Constantly on the point of making a direct approach to people only to create distance from the public by holding up absurdity as something to catch the eye. As such, his work proceeds both alone and ahead of the rest.

We would like to express our gratitude to the many people who have made this exhibition possible. Our thanks go to all those who have so generously loaned their works. To Peter Michael Hornung and Signe Marie Jacobsen for articles for the catalogue, to Claudi Thyrrestrup for photography and to Dan Eggers for graphic design. Our thanks to colleagues and helpers for keeping their spirits up. And sincere gratitude to the various foundations without whose support the exhibition would not have been possible: our thanks go to Spar Nord Fonden, Bikubefonden, Knud Højgaards Fond and Beckett-Fonden for their support. Finally we would like to say thank you to Lars Nørgård himself: for his tireless energy, his infectious dedication and his art, which delights and surprises us and takes us in new directions.

For the exhibition LUKSUSSYNER, KUNSTEN Museum of Modern Art, Aalborg 2011