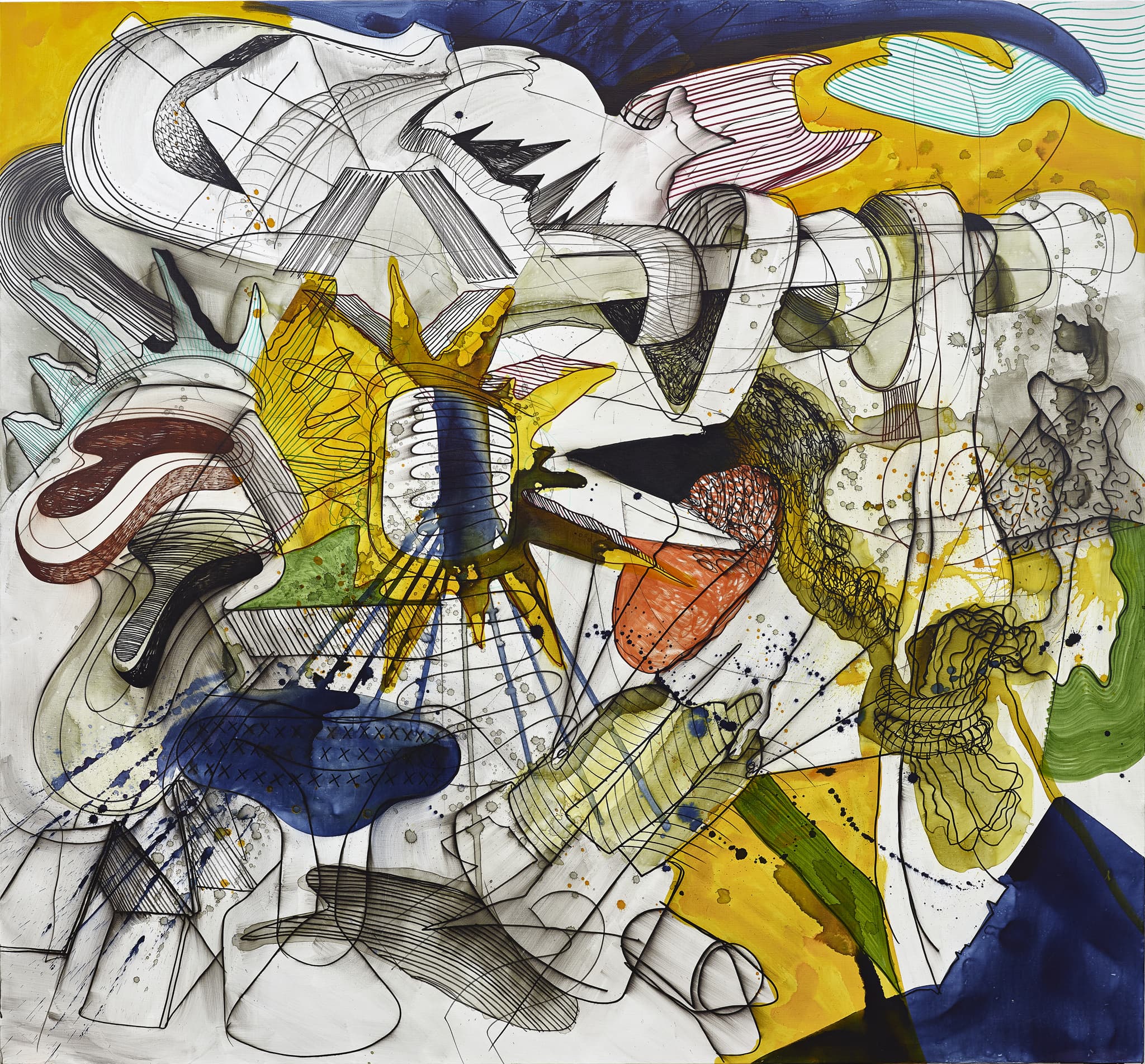 Lars Nørgård is inextricably linked to the recent history of Horsens Art Museum. After the outline for the museum had been established in October 1984, it did not take long before the first piece by Lars Nørgård became part of Horsens Art Museum’s collections. The work was ‘Schlager’, painted in the same year. It was viewed and purchased from Værkstedet Værst (Workshop Worst) on a cold December day, shortly before this pivotal shared studio space closed down – the building had to be vacated. A dark and heavy figurative painting painted on sheeting canvas from Daells warehouse and obviously painted on top of another painting – funds were not unlimited. The painting was very different from those Lars Nørgård had previously shown, at the exhibition ‘Can a Woman Be Happy With a New-wave haircut’, in the spring of 1984 at Gallery Specta in Aarhus. ‘Schlager’ had, as mentioned, been painted on top of an earlier painting, namely ‘Revenge of Dollars’, which had been exhibited at the Specta exhibition.

Exploration and examination were key words in those years, and very characteristically, for Lars Nørgård, they have been key words to what has constantly been present in his art throughout, whether we look at his paintings, drawings, printmaking or sculpture. Equally characteristic is Lars Nørgård’s alternation between figurative and relatively abstract canvases, while he has always maintained a more or less figurative and very often humorous twist in his drawings.

The painting ‘Schlager’ was, as I have said, the first work that came to Horsens Art Museum, but certainly not the last. In the years that followed, our collection of works has continually grown, so that today we find ourselves in the lucky position of being able to present Lars Nørgård’s full oeuvre, where variability and an exploration of the possibilities of visual art play an important part.

It is, of course, not only through our collections that we, at Horsens Art Museum, have enjoyed a special relationship with Lars Nørgård. Already in 1986, we presented Lars Nørgård within the context of an exhibition, together with Michael Kvium, and later, in 1990, 2000 and 2007, at solo exhibitions, all characterized by a focus on specific insights into current artistic issues, which at the time were at the fore of Lars Nørgård’s work. This latest exhibition, which we are now presenting at Horsens Art Museum, is no exception, although with the modification that the 100 drawings being presented here have been created over a period of 15 years at various hotels in Israel and on Iceland, at Jekels Hotel in Skagen, Jantzens Hotel in Gudhjem and of course at home at the kitchen table – “Nothing is as encouraging for a fine line drawing than the disturbance of being surrounded by children and cooking,” he says.

Where our last exhibition, here at the museum, was titled ‘Bad Nerves’, we now move even further down that same track, this time with the title ‘Morphine’. It was a dramatic sequence of events, with a possible slipped disc and the onset of severe pain, giving rise to a sudden close acquaintance with this drug, which inspired the choice of exhibition title.

Lars Nørgård’s work does not progress evenly from A to B, as indicated. There are instead dramatic changes in style conveying evidence of great artistic confidence and authority. This is clearly seen in our latest acquisition, the painting ‘Fairway’, from 2013, epitomising the culmination of Lars Nørgård’s figurative period, with the diving bell, the playing card and the mandrill monkey. According to Lars Nørgård, the monkey went off and died, allowing his style of paintings to once again swing back into the abstract.

In the new paintings, we present here, there lies a scribing of line work, like a net, under the colour. We see lines of Chinese ink, in varying degrees, which the artist has applied to the canvas with a homemade brush with a two-meter long handle. The long brush has created a distance to the surface of the picture, which has lain on the floor while the markings were applied. Ink is difficult to control and therefore has to be applied quickly. On top of the ink lie the final layers of oil or acrylic paint, creating a nuanced interplay between the various layers of the painting. The effect is light, playful and elegant and a significant development of Lars Nørgård’s style.

In between working on these new paintings, Lars Nørgård has embarked on experimenting with earthenware (terracotta), among other places at Royal Copenhagen, and the results complete this exhibition.

A large thanks is due to Lars Nørgård for his exemplary sense of cooperation, both within the scope of this exhibition project but most certainly throughout the past 30 years as well. In addition, we would like to thank the Danish Arts Foundation for their financial support of this project. I hope our audiences will share our enthusiasm for this exhibition and for the great achievements that Lars Nørgård, once again, has reached with his work.