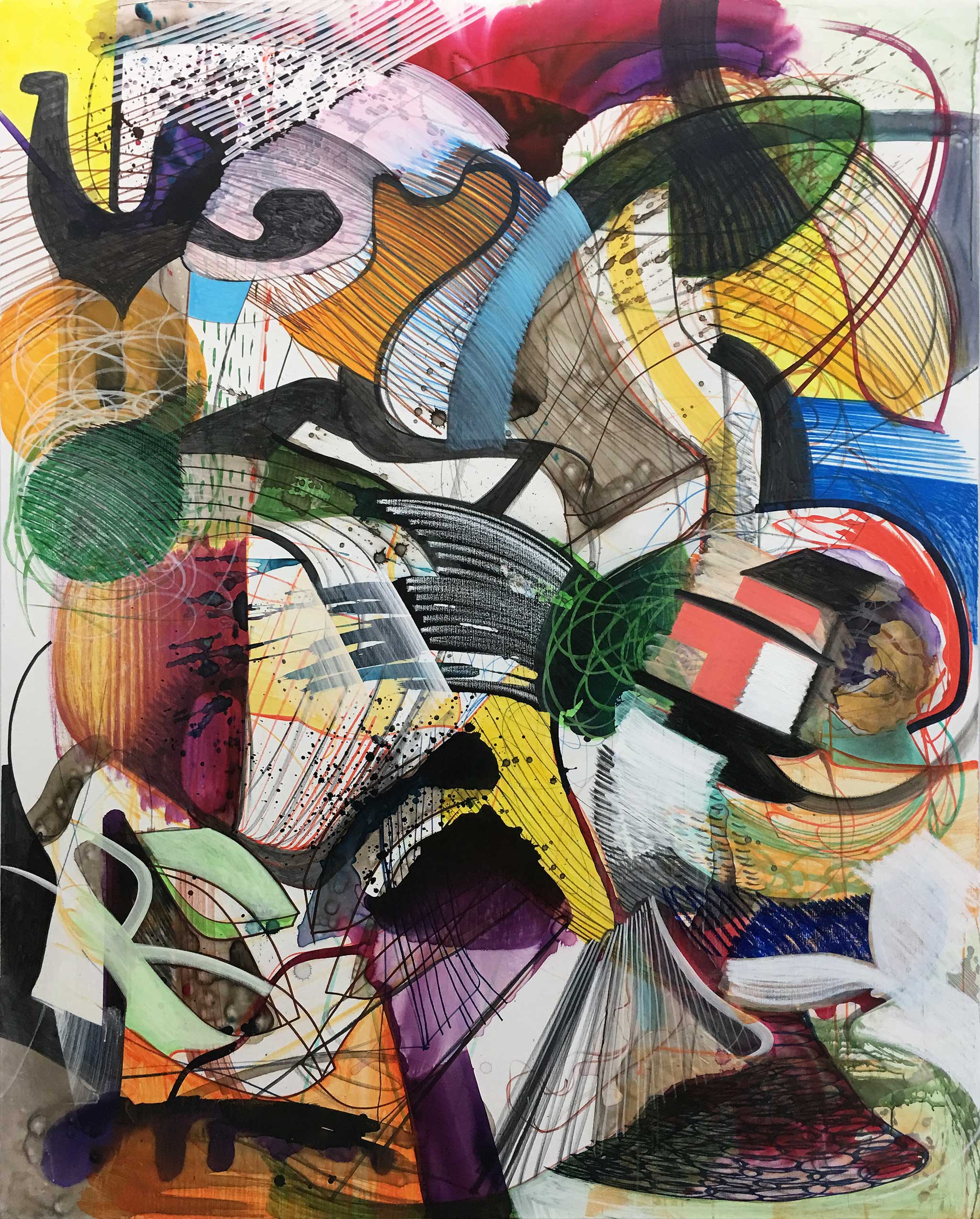 Lars Nørgård’s artistic practice can be characterized in several ways because it is so complex. Here, I’m going to mention two dimensions of his work: Firstly, a striking use of colour, and secondly his special interaction with figuration. The two dimensions are closely linked.

Regarding the figurative (i.e. what the paintings possibly resemble), which plays a major role in Lars Nørgård’s art: Lars is, as many will know, an inspired draughtsman of black-and-white drawings, and much of his artistic production is figurative in the traditional sense. His work evidently represents something, which these works here do too, in a sense – and yet again they do not.
On the one hand, the work comes across as pure surface, seemingly a vertical accumulation of characters in two dimensions, a surface on which parts of figures (each of which resemble something) are fitted into one another in an abstract composition. On the other hand, these images are not entirely two-dimensional. One sees depth, perspective, we perceive three dimensions while experiencing the figures, not as fitted into one another but as lying in front of and behind each other. Suddenly the flatness of the canvas opens – and we are looking into a whole world instead of onto a uniform surface.

These two dimensions or circumstances correspond to two different functions: firstly, an abstract composition, which has an almost ornamental function – and secondly, there is the figurative function of rendering something recognisable: it represents something, or rather reveals a whole array of representations, assembled together into and across the various individual elements. The use of colour contributes to this double effect – acting, in itself, like a visual crack of a whip to the eye. One can look at these works again and again, repeatedly finding new components and angles, new depths and surfaces, all awhile the work itself wavers, like a puzzle picture, between vertical and horizontal, abstraction and figuration.

The bottom line of this is, of course, that it is not either/or but rather both. You could call it “exploded figuration” – a pictorial staging of an on-going and unresolved relationship with the figurative. Such eclectic doubleness challenges both our gaze and our imagination in such a way that we cannot, or indeed ever will, be finished seeing these works anew. I believe, and hope, that this will apply to you too: One moment, these works will appear as purely dynamic, whip-cracking arrangements of decorative colour – and the next, as something you can delve into, in a quiet moment.