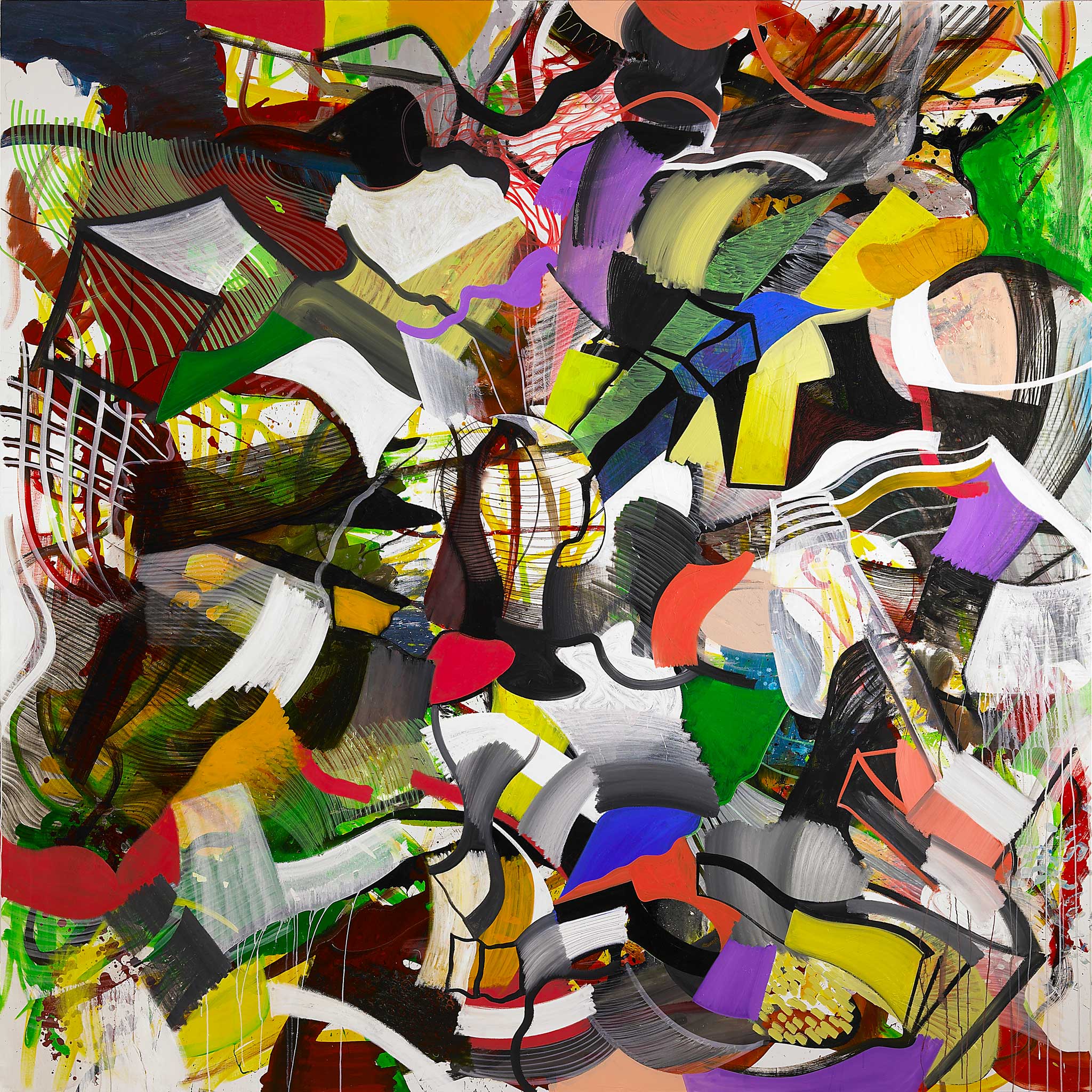 A picture that is like a plethora of fragments. A coherent whole pieced together from a splintered universe. A meeting between structures that are amputated and cracked, and which time has frozen in the middle of a furious centrifugal movement. Such a picture is a jigsaw puzzle that it will never be possible to assemble correctly, but in which each and every piece has, however, found its definitive place.

With his latest works, Lars Nørgård (born 1956) has portrayed a universe that seems to be built up of nothing but stunted fragments and small details. It is as if the old world, with all its unambiguous stylistic reference points has been detonated from within. The artist has then used the shrapnel emanating from this explosion to create a new image of the world – a disintegrated image that is nevertheless coherent within its own kaleidoscopic logic.

Throughout the history of art, it has always been difficult to classify artists who have chosen to break away from the intensely deterministic sequences that distinguish the history of style. Such artists are more difficult to explain than those who meekly occupy the slot allocated to them by that history. They are therefore considered unpredictable and ”difficult”. However, only the most dyed-in-the-wool comfort junkies of the art world view Lars Nørgård as unpredictable and difficult. To everyone else, he is an artist in constant development, and a painter for whom movement is the raison d’être of the painting. For this reason, it is a matter of maintaining motion as motivation, not only in relation to the structure of the individual work, but also with regard to the rhythm of the artistic expression itself.

Just when it appeared that it would be possible to pigeon-hole Lars Nørgård neatly within the chaotic contemporary stylistic spectrum of our current age, he broke away from prior expectations and chose to continue elsewhere. More specifically, in a place where he could return to the very beginning once again, enriched with fresh experiences and a renewed sense of personal courage. It has become his destiny to strive for the contradictory, the dialectic. This is why he works back and forth between idioms that both disavow and supplement each other. If it were at all possible to apply a concept as archaic as “style”, it could be said that Lars Nørgård’s oeuvre draws on symbolism, cubism, concretism, surrealism and the abstract expressionism which he has always favoured. Nevertheless, he never ends up following the paths trodden by others before him; he stands apart, in his own category where he can conjoin his own project with all kinds of artistic temptations. Just like the American abstract expressionists, he has no problem with giving in to the chromatic temptations of the palette. As he sees it, extensive use of strong, clear colours makes a picture more difficult to access and penetrate. The numerous spaces, contours, structures and planes that are whirled together, as if in one giant, compact movement, serve to mask what is actually going on in the picture. And this is the whole point: to paint pictures that are hard to pin down, and on which it is even more difficult to pronounce an unambiguous judgement.

Lars Nørgård is only slightly younger than the members of the Danish generation who, in the 1970s, believed they could predict the demise of painting as a art form. But painting made a forceful comeback, thanks in no small part to artists like him. Today, he stands proud as one of the most exuberant and immediate artists on “the mountain”, which, incidentally, is very thinly populated with artists who still dream of creating MAJOR ART and authentic painting. He is by no means a “concept artist” who has secretly smuggled his box of paints into the creative process. He does not start by thinking about what he wants to paint – rather, he paints his way to what he wants to see.

Lars Nørgård’s works can be considered outpourings that are not bound by any creative control until after they have been released. If there is an underlying intention, it is to convince all the eruptive and impulsive forces in the painting to find their own place within the framework of a coherent pictorial strategy. Even in its totality, each work retains a sense of having been pieced together from broken quotations from different worlds, although with the common denominator of having been viewed from a single glance – that of Lars Nørgård. A glance that clearly features a dash of impishness.

Lars Nørgård is an artist who makes use – or, more accurately, has made use – of figures. However, his figuration was under development from the moment he first applied it. This aspect of something unstable or transient has endured as a condition in much of what he has taken on since. It continued when an expressionist tornado blasted across Nørgård’s figuration towards the end of the 1980s, disintegrating the limbs of his figures. At first glance, it appeared that abstraction had finally gained the upper hand – although this was accompanied by an intuitive feeling that his figuration was simply dormant, lying in wait for the opportunity to launch a counter-attack to restore order and recognisability.

Even when Lars Nørgård paints, he seeks to dissolve the core of his pictures, to remove the focal point of the events from the centre, where you would otherwise expect to find it.
Why this lack of point of equilibrium? Why this absence of motif? Perhaps because it adds an air of unpredictability to the painting. It seems as if it is distancing itself from its own form and thus allowing what is in principle a stationary picture to achieve the pinnacle of movement – from a mental perspective. The picture is to be an energy field with a manifest appearance that the artist himself compares to electrical discharges. Or a pressure cooker.

However much future there may be in Lars Nørgård’s works, there is also a significant past. From the end of the 1970s until the start of the 1980s, a brand new, rogue form of expressionist recycling art appeared. It was known by different names in different countries – “New Image Painting” in the United States, la transavanguardia in Italy, “New Expressionism” in Germany and “young wild painting” in Denmark. In this new style of painting, it was considered almost a prerequisite to squeeze as much as possible onto the surface available. If you could not limit yourself to painting in the realistic, expressionist, non-figurative, concrete style – or whatever else you chose – you could simply choose to follow the lead of Lars Nørgård’s generation – the avant-garde of the 1980s. They left all the options open all the time; not because they found it difficult to make a choice, but because they could see no point in choosing – or rejecting. Everything was present at the same time, after all, so the whole point was to make use of as much as possible on the basis of the impulsive discretion of the moment.
Prior to this – before the advent of the collective young wild movement– Lars Nørgård had travelled far and wide. From his home town of Aalborg in Denmark, he moved to Copenhagen, where he studied at the School of Applied Art (now called The Danish Design School) for three years. He then travelled to San Francisco on the west coast of the United States, where he attended the Academy of Art College in 1980–81. It was here that he encountered New Image Painting. From California, he returned to Copenhagen and joined the Værkstedet Værst group.
The members of this experimental workshop had every opportunity to challenge artistic boundaries, and this is precisely what Lars Nørgård did, encouraged by the artistic liberation that was also taking place elsewhere. Style consciousness disappeared in favour of an open and challenging attitude to the forms of modern pictorial art. The idiom of happenings was tested as well, along with an examination of film as an experimental medium. Since then, Lars Nørgård has worked back and forth between idioms that were almost openly opposed to each other. Typically for a member of his generation, he created works that poked fun at the reality of art and all its inherent contradictions. On the one hand, he surrendered to the draw of figuration, to which he added a dash of absurd humour. At the same time, however, he was challenged and tempted by abstraction, by the non-representative that nevertheless resolves into a representation of something. Every time he devoted himself to one of these artistic understandings of reality, he found himself drawn back by the other after a while. On one side, there was figuration – or drawing – filled with strange, caricatured and surrealist episodes; on the other, there was painting, which often took on an abstract nature because the colour demanded a liberation that the lines of drawing could never hold down.
Should anyone question whether Lars Nørgård is approaching or retreating from abstraction, it is sufficient to study his works to understand that doubt, the unexplained and the untrustworthy do not constitute an escape from the familiar world. In contrast, they are a new approach to viewing the world.

Every modern artist dreams of creating something that will stand as a stable landmark in the current of time. Every artist moves – is almost obliged to do so – and the oeuvre moves with him or her. If the artist did not do so, the art would contradict the conditions under which everything else in our age is created. When a dynamic and impatient world demands changes and restructuring – at a constantly increasing pace – it is not the task of the artist to act as a brake pedal and cling steadfastly to the artistic practice of a bygone era.
The artist is not to defy the spirit of the age, no matter how transient it may be, because this will cause the artist to stagnate and become a hostage to his/her own routine – a “handyman” as Lars Nørgård puts it. Of course, the artist must always claim title to his/her own agenda. But even the most independent agenda must be co-ordinated with the reality that constitutes a set of conditions that are common to everyone. No matter how splintered this reality may appear.
That is why Lars Nørgård moves. Incessantly. And why his agenda moves with him.